What if Smart Urban Farming was the future of Agriculture?

Earth is expected to be home to 9.6 billion people by 2050. That’s over two billion additional people to feed, a goal only attainable if we increased current food production levels by 70% in the mere 35 years we have ahead of us. Ambitious, yes, but not unsound, especially considering the numerous promising technologies that have emerged in this field in the past couple of years.

The agricultural landscape however differs pretty greatly across the globe. While most Western countries benefit from well-developed infrastructures, widespread irrigation and copious fertilizers, much of Africa and South Asia is highly dependent on weather conditions, and lacks proper infrastructure to shift equipment and resources from one point to another. The hurdles are numerous, but implementing smart urban farming systems might just be the way to tackle these issues. When looking at the figures, urban farming makes more sense than ever: globally, urban dwellers represent 54% of the population, a figure which should grow to 70% by 2050.

While eating locally grown products is nowadays mostly just a trend among higher middle class consumers, it might just become tomorrow’s norm. Indeed, recent developments have brought to light the potential of growing plants and raising animals within and around cities, thereby reducing food transportation costs and associated environmental impacts. On top of that, urban farming would also help narrowing the gap between social classes in terms of access to healthy food, which might contribute to lowering rates of obesity and diabetes among long-income populations.

But where will cities find room to grow large crops of corn? Vertical farming, a new agricultural approach in cities, solves urban real estate scarcity concerns by growing food in vertically stacked areas indoors and outdoors. All the while taking up limited space, this method allows farmers to control most elements of the production: the type and amount of light the plants receive, the temperature of the environment they’re grown in, the amounts of water and nutrients they are given… 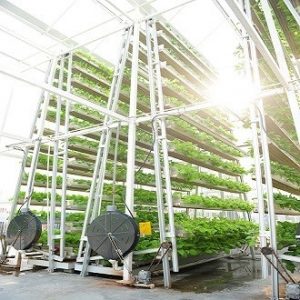 This new farming approach has already been adopted in particularly dense Asian cities like Singapore, where crops are grown indoors, in tall buildings. In the United States, aquaponics indoor farms are also being tested, including in Chicago where FarmedHere produces “15 times as many crop cycles a year compared to traditional farming”. However, some challenges do remain, including the fact that vertical farming is very energy intensive, and so far only smaller crops are being grown.

But are city-grown still as healthy as country-grown vegetables, you might wonder? A legit concern that remains, especially considering the substantial pollution levels measured in cities across the globe. Fully embedded in the city ecosystem, urban farming still faces a number of hurdles yet to be overcome. Urban designers, technologists and farmers must learn to work together, in order to make this new agricultural approach a successful one. There is still a long way before urban farming becomes widely spread and abundant enough to challenge traditional agriculture.

China, vastly talked about when it comes to massive population densities and p 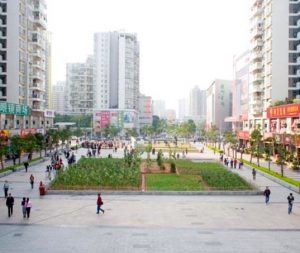 ollution issues, is now brought under the spotlight in the smart farming department as well. With an ever-growing urban population, a fifth of its arable land contaminated and three-quarters of its water surface unsuitable for drinking or fishing, the Middle Kingdom has had more than one obstacle to face in feeding its population. Beijing has been doing extra efforts in coming up with innovative ways to bring agriculture closer to its people. Ever since the 1990s, multi-function urban agriculture such as “agro-parks” has been integrated in peri-urban areas, both producing food and serving as educational tools for nearby inhabitants.

Exploiting the Data-Driven Technologies that are available to us

Increasingly integrated in urban farming are smart, data-driven solutions, which rely on technology to better understand agricultural production. Through “precision agriculture”, sensing technologies are used to collect all kinds of data associated with the production process, whose analysis allows for a more optimized and customized production. These can go from soil-mapping, machinery, crop yield, weather data… 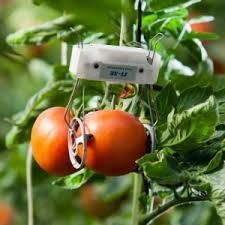 Sensors can be used all along the production cycle, and provide farmers with better control over seeding, fertilizer and pesticide usage, irrigation; and reducing the need for human surveillance to name a few. An Agetech study revealed that data collection and analysis can help reduce costs related to seed, fertilizer and pesticide purchase by 15%, and water consumption by 30%. With such drastic cost savings, the mass production methods used in agriculture today will soon hardly make sense anymore.

Furthermore, the technologies used nowadays in smart farming are numerous: connected objects (especially for livestock rearing), automatization of processes such as irrigation systems… resulting in more efficiently managed rural exploitations, better quality crops, and larger quantities produced. Several projects have already been sponsored by the European Union, such as the EU-PLF project which assesses the feasibility of bringing proven and cost-effective Precision Livestock Farming tools from the lab to the farm.

Data-driven solutions provide two-way street benefits, as they both empower farmers to make better, more informed decisions, while simultaneously providing end consumers with better traceability of the products they consume. The concern that remains with data-driven technologies is always that of ownership. Who owns the data collected? Who is allowed to use it? How is it shared, and to what extent? The companies selling these solutions are numerous, but a legislative framework for how the data should be shared is yet to be implemented.

While smart cities have so far mostly focused on building more efficient and sustainable infrastructures, including in terms of energy usage and means of transportation, urban farming is yet to be fully integrated in the urban ecosystem. In pair with meeting our growing food needs comes reducing our impact on the environment, and smart urban farming might just be the way to do so.