Virtual Assistants are taking over our Homes!

By now, nearly every smartphone user has tried using the voice-controlled artificial-intelligence system available on their phone, be it to simply ask the traditional Ultimate-Question-of-Life-the-Universe-and-Everything to Siri, or to find the nearest sushi place with OK Google or Cortana. However, frequent users of voice-controlled systems remain pretty rare: most people still find it somehow odd to talk to a device out loud, especially in public spaces. According to a study conducted by Creative Strategies, people tend to prefer using voice assistants when they are alone. A fact duly noted by the world’s major tech companies, who’ve been investing millions into research to develop home voice-controlled devices, another step towards building the futuristic connected Smart Homes we see in movies. Amazon, Apple, Samsung and Google seem to have engaged in a race of who-will-develop-the-most-optimized-system-first, and Amazon appears to be leading the way…

Who hasn’t dreamed of waking up to the sweet scent of coffee brewing, lights slowly turning on while your personal assistant asks you what jam you’d like on your bread this morning. Or sipping warm caramel tea in your cozy sofa, window shades shutting down as you tell your TV what movie you’d like to watch tonight. Well, this reality might not be so far off, as voice-controlled home systems are slowly taking over the IoT market.

Perfect tools to help you plan your day and adjust your house’s electrical equipment without lifting a finger, personal assistants’ functionalities are numerous. Activated by the mere sound of your voice, these systems are designed to answer your every question or request – maybe keep you company, even – connecting a wide range of smart devices into one integrated system. 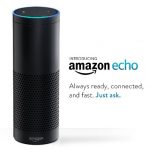 home, many third-party services are now also accessible using these systems. Amazon’s Echo (dubbed “Alexa”), for instance, allows users to switch from one Spotify playlist to another, order a meal or even check their energy account and next payment date, all the while going about their daily activities across the room. Along with its UK launch in September, Amazon announced a number of news partnerships, including with EDF Energy and Hive, assisting consumers in their energy consumption management by submitting meter readings and adjusting lights and temperature in their house. A partnership with BMW was also announced earlier this summer, which will allow drivers to use voice command to unlock their car’s doors or check its fuel level.

A booming environment, witness to innovative tech firms ready to take on the market

While the range of smart home devices available to consumers is steadily expanding, voice-activated central systems are just entering market. Launched in late 2014, Amazon’s Echo benefited from the first-mover’s advantage (with 1.6 million users as of April 2015), but is yet to take on the mass market. This fact didn’t stop the giant from pursuing its research, and releasing a smaller, portable version of Alexa, called the Echo Dot, earlier this year, and to announce its arrival on several European markets this Fall.

In the past few months, a number of big tech names also announced the launch of products directly competing with Amazon’s Echo. Among them, Google Home could potentially cause considerable threat to Alexa, as it carries with it the Google search engine intelligence, allowing it to understand a wider range of voice commands. Indeed, while Google Home can follow a train of thoughts and queries relying on each other, Echo only responds to established commands.

Apple’s Home app, making its debut this month in iOS 10, also allows users to control their smart home devices by voice through phone, tablet and watch. While the system is software-based only as of now, Apple is rumored to be developing a hardware speaker-like system, yet another rival to Echo and Home. The real new addition to this application is its all-in-one characteristic, controlling all Apple smart technology in one single integrated app, while “connected” objects have always worked on distinctive apps. In addition, developers now have the brand new possibility of building Siri’s voice command functionalities into their own apps, which might soon allow users to control their home appliances directly through Siri for example, should apps such as Wiser Smart or Homelive enable that option. This is a major development for Apple’s voice command system, which was previously restrained to Apple apps and didn’t support third-party integration.

Samsung also announced in late August that it was designing a portable connected speaker, while Sonos is believed to be developing its own voice-activated assistant for future speaker releases.

Technological and privacy concerns that are still left unanswered

One of the main barriers to development in the industry remains the technological fragmentation that endures within the connected home ecosystem. Indeed, multiple networks, standards and devices are currently being used, leading to interoperability issues between products. Rather expensive, these systems are also deemed intrusive by many, who feel uncomfortable being “listened to” non-stop, especially inside their own homes.

Many wonder how much these personal assistants listen to, and the extent of their control on your home’s devices. How do you ensure the system is not constantly recording? Is the wake command really initiating the recording? Can a hacker (say, the NSA) listen to whatever it is I’m telling Alexa? Concerns have also been raised as to how much of the data collected by the device the company has access to. Users’ concerns are more than legitimate: smart appliances have access to a whole new world of user data, entering the private sphere of their homes like never before. These appliances generate data providing insights on users’ patterns and behavior, which could allow companies to infer considerable information about their lifestyles. If shared or made public, these could potentially be used against them.

Companies have tried to reassure their customers by providing them with solutions to have somewhat of a control over the data collected. In Echo’s case, the device was conceived in such a way that users can manually mute the microphone, and the data isn’t sent back to Amazon’s servers unless the wake command has been activated. Also, transcriptions and recordings of past voice commands can be deleted by owners.

While the hurdles the industry must overcome in the coming months are still numerous, much is to be expected in this field. Voice-activated personal assistants might not be truly revolutionizing the IoT market, but they are however bringing consumers one step closer to the smart connected home depicted in futuristic movies. And like every great innovation, user acceptance takes time, and who knows? Personal home assistants might just be the norm in tomorrow’s average household. Let’s see how these tech giants take users’ concerns and opinions towards building truly innovative and functional voice-controlled systems.